FROM OUR NETWORK: Time to diversify to Africa!

China represents over one-third of Volkswagen’s global sales, 40 percent of Infineon’s semiconductor global production[1] and 1/8th of Siemens’s total global revenues. China has been Germany’s top trading partner for six years in a row.[2] Russia, on the other hand, ranks only 14th, but is still home to $25 bn of German Foreign Direct Investment (FDI) stock and 3,651 German-owned companies employing a total of 277,000 workers.[3] Despite strong backlash, Despite strong backlash, Bayer, Claas and Merck, to name a few, are still active in the world’s largest country.

Figure 1: Total German outward FDI stock in Russia, China and all of Africa (2019) 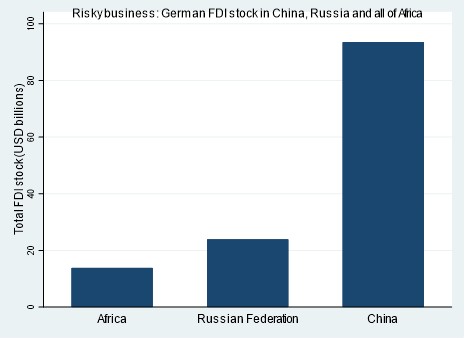 Since February 24th, these numbers have been trending downwards. EU-imposed sanctions on Russia following Putin’s invasion of Ukraine and Olaf Scholz’ announced “Zeitenwende” have spurred intense debates not only on German and Russian economic interdependence, but also on Germany and China’s. What would a Chinese invasion of Taiwan mean for German-Chinese business ties? In a recent EU survey, 23 percent of Western firms said they were considering moving operations away from China. The VDMA lobby, representing 3,400 German machine manufacturing companies, now offers workshops on how firms can find new markets beyond China. The German government has recently and for the first time refused loan guarantees for investments by Volkswagen in China – a move that’s almost unprecedented. Some members of the Bundestag argue that the renewed formation of Eastern and Western blocks will lead to a new world economic order.

What would this new world economic order look like? What will happen with the billions of dollars of revenues and millions of workers employed by German companies doing business and producing chips, cars and chemicals in Russia and China? Most companies are not reshoring, but friendshoring. The Financial times claims geopolitics will eventually trump neoliberal economics, making friendshoring more likely. India, Vietnam and Malaysia are some of the more obvious candidates likely to benefit from increased investments. But what about Kenya, Ghana and Egypt?

Today, Africa plays a minor role as target for German FDI, receiving less than one percent of total German FDI stock, according to the Kiel Centre for Globalization. Even Oceania hosts a larger volume of German FDI than the entire African continent. While German FDIs are largely concentrated in Northern and South Africa, German private investments have been growing fastest in Nigeria and Kenya.[4] What’s interesting, also, is that 60% of German FDI in Africa is in manufacturing, while the US, Great Britain and France invest mostly in commodities, and to a lesser degree in (financial) services (KGC, 2020).

African economies can benefit from German manufacturing investments. Not only does FDI bring the fresh capital, skills and technology so badly needed to raise living standards. The UN argues FDI is becoming a major source of financing economic diversification in Africa. Research suggests that manufacturing FDIs are more beneficial to the host economy than FDI inflows in non-manufacturing sectors (Miao Wang, 2009). Manufacturing investments provide jobs, increase value addition and boost local firms’ capabilities through spillover effects such as the dissipation of industrial processes, technical know-how, or management techniques. Germany’s model of dual vocational education and training in particular has the potential to transform skill formation systems and contribute towards a more knowledge-based production in the host country, as shown in Mexico. Volkswagen, having recently opened assembly lines in Rwanda, Kenya, Nigeria and Ghana, has been investing in an ecosystem of local, cost competitive suppliers, to its own benefit, and to that of the host countries, according to Africa Verein.

So why should German businesses move to Africa?

First, market size: the UN projects Africa’s population to increase from 1.4 billion now to 4.1 billion in 2100, with Nigeria’s population alone projected to overtake China’s before 2100. In the meantime, the world’s most populous nation is about to shrink while Russia has seen demographic decline for years. Labor force growth in sub-Saharan Africa is already much faster and greater in numbers than in any other region of the world.[5] Africans are also getting richer and more urbanized. The world’s fastest growing middle class will be in Africa, and it increasingly lives in cities, demanding consumer goods and eager to work in the services or manufacturing industries, rather than agriculture. What is more, the African Continental Free Trade Area has become the world’s largest free trade area, representing a single market of 1.4 billion people. By eliminating 90% of tariffs on goods and services traded within its boundaries, it has the potential, if properly implemented, to not only grow intra-African exports by over 100 percent (led by manufactured goods), but also raise incomes and lift 50 million people out of extreme poverty, according to the World Bank. Meanwhile, China’s economic slowdown paired with an ageing population and a shrinking workforce will reduce its demand for cars, consumer- and capital goods.

Second, winter (and climate change) are coming: German manufacturing companies dependent on cheap Russian gas, especially the chemicals, glass and cement industries, could be forced to move abroad to where energy is cheap and labor is plentiful. What is more, the accelerating clean energy transition is prompting a global scramble to secure critical raw minerals, required for the production of wind turbines, electricity networks or batteries. Germany is behind schedule on its goal of putting 15 million electric vehicles on the road by 2030, in part because the automotive industry struggles to procure the necessary cobalt, lithium and nickel used in the manufacture of batteries. Germany should learn from its mistakes and diversify not just its energy supply but also that of critical raw materials. Its main sourcing partners for raw materials are Russia and the Netherlands (WBG, 2019). Meanwhile, the Democratic Republic of Congo (DRC) is home to over 60% of the world’s cobalt while Ghana, Namibia and Mali are rich in lithium. It’s a race against time as China already controls 70% of DRC’s mines. While German industry has been reluctant to engage in mine production, the Federal Government recently announced it will be more involved in securing raw material supply from abroad – with a focus on sustainability and human rights. This led to the establishment of a competence center for mining and raw materials in Ghana. German companies are likely to follow, provided that African governments upgrade and enforce environmental and social standards in the mining industry.

Third, unsaturated markets: Since the 1990s, German manufacturers have been rushing to Asia where the increase in demand for cars and machines was dramatic, while machine manufacturers in North America and Europe mostly sold replacement parts. Demand growth couldn’t be serviced through exports alone: companies shifted from exporting to Asia to a strategy of “produce where you sell” (Herrigel, 2014). Meanwhile, African economies have seen a large increase of FDI in the auto components, chemicals and machinery sectors: FDI in auto components more than doubled, investments in industrial machinery increased almost four fold and FDI in chemicals production rose by a staggering 2000 percent (Brookings, 2018). As the world’s largest exporter of cars and third largest exporter of capital goods and chemicals, German industry could play a key role as a supplier of investment and consumer goods on the continent. But the share of German machinery in African machinery imports has decreased: In 2011 over 10 percent of sub-Saharan African machine imports came from Germany and 14 from China. Ten years later, China managed to double its share to 30 percent while Germany’s share decreased to 8.5 percent (VDMA).

African economies are plagued by many market failures, ranging from infrastructure challenges, governance issues and skills shortages. But there are remedies – and heterogeneities. The German government offers investment guarantees to cover political risks. Research has found that these help reduce negative effects of low institutional quality. The number of Special Economic Zones (SEZs) is increasing rapidly in Africa, providing reliable electricity access, business-friendly regulations and connection to air and seaports. Also, Africa is not a country. While only 9% of citizens in the Central African Republic have access to electricity, almost 90% of Ghanaians are connected to the grid today. On the ease of doing business index, Rwanda ranks 38th globally, overtaking Portugal and Poland. Speaking of skills shortages, Kenya’s human capital ranks higher than India’s or Indonesia’s.

For firms, revenue matters most. Does Africa’s economic potential translate into business revenue? Acha Leke and Landry Signe from Brookings asked global executives how many companies in Africa earn annual revenues of $1 billion or more. Despite many answering zero, more than 400 such companies exist, and they are, on average, both faster growing and more profitable than their global peers. Bundesbank data on annual revenues earned by German foreign affiliates abroad present an interesting picture, too: comparing firms annual revenue growth rates in China, Russia and the African continent, annual revenue growth rates made have been increasing between 2016 and 2019 in Africa, while decreasing in China (Figure 2).[6] Despite revenue data for 2020-2022 not yet available, one can project that annual revenue growth rates in Russia are likely to remain volatile given the pandemic, sanctions, and the fluctuating oil price. 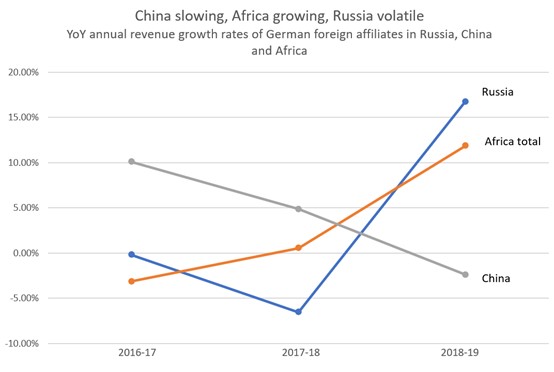 Source: Authors calculations based on the Bundesbank’s FATS database, 2021

The world is changing as we know it. 2022 has been rough so far for the German economy, reliant on Chinese demand and Russian gas. The freezing of assets in Russia and its isolation for decades to come, and the growing uncertainty around China forces German industry to rethink its ties. These geopolitical shifts offer opportunities for African economies. FDIs, especially in manufacturing, can support African countries in shifting from merely exporting raw materials to processing and packaging them at home. German manufacturers, dominating the automotive, mechanical engineering and chemical industries, should take the opportunity to bridge the massive supply and demand gap, rather than wait for competitors to do so. While Germans are not known to be risk takers, they shouldn’t be blinded by perception bias either.